As a kid witches were terrifying. Green skin, long, crooked noses, warts, grimaces, long, tangled hair, and an evil glint in their eye. They wanted to cook you up and eat you, swear revenge for sparkly ruby slippers and fly off on their broomstick, cackling in to the night.

Today they’re beautiful, powerful, edgy, sexy, and something any girl would want to be. When, a couple of years ago, teenage girls and young women dedicated themselves to the vampire and werewolf – aka a sparkly R Patz and Taylor Lautner’s abs – today it’s all about girl power. Specifically the magical kind. But how, and why, have witches become the ultimate pop culture it girls*? And why is it important? 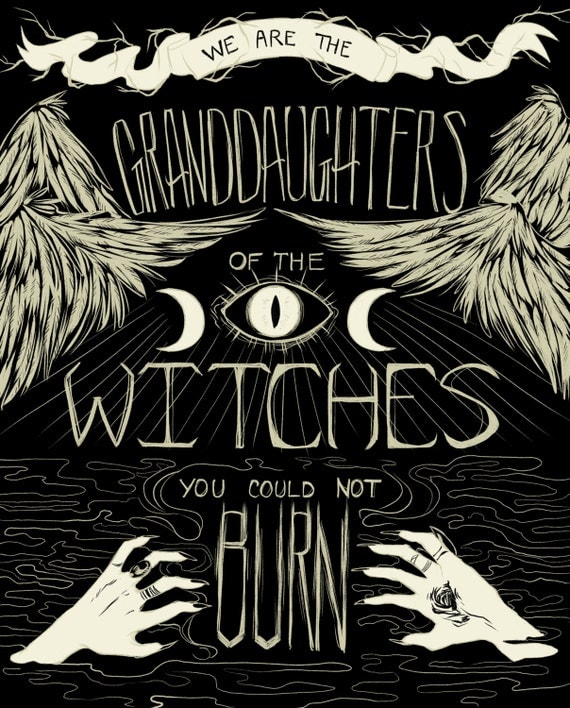 As I have already mentioned, witches = girl power. Any good literature graduate worth their Women in the Classical World module knows that the fear of witchcraft essentially boils down to the patriarchy’s fear of female power, sexuality and innate connection to the natural world (see, my dissertation did come in handy after all!). From the witches of classical Greece and Rome (Medea, Medusa, and Circe) to Arthurian legend (Morgan le Fay), childhood classics (the White Witch of Narnia) and action films (Cara Delevingne’s Enchantress in Suicide Squad) women with magical power have continually been used as a stick to beat other women with.

So by reclaiming the witch today women are able to reclaim that power and give a big fuck you to anyone that dares challenge them. No wonder that Lana Del Rey called for her coven of fans to use witchcraft to get rid of Donald Trump then. Girl power indeed.

It is a given: the witches’ coven is the coolest girl gang ever. A group of women, each uniquely powerful and each with style worthy of the fire emoji, but brought together as an equal celebration of togetherness; demonstrating the power that girls can have when supporting each other. Just think of the girls of The Craft stalking through their high school hallways in their reworked Catholic school uniform, each individual but united by a shared identity. It was the alt-girl style that defined an entire generation of teens in the 90s. Add in the attitude – “we are the weirdos mister” – and you have yourself a cult film.

Today we have the black-glad, hat wearing girls of American Horror Story: Coven; already iconic and recreated for Halloween parties across the world.

Despite being a teen supernatural drama with bad stunts and some questionable acting Buffy The Vampire Slayer will forever be one of the greatest TV shows. Using the supernatural world to explore important issues for teens Buffy continues to pave the way for Young Adult television, film and fiction (add in the kickass opening song and wardrobe and you have a winner). One such ‘taboo’ subject treated in Buffy was the lesbian relationship between Buffy’s best friend Willow’s and her fellow Wicca Tara. Buffy was one of the first American prime time shows to show a lesbian kiss (between Willow and Tara) and later the first American show to depict a lesbian sex scene (between Willow and another character Kennedy).

Feeling the magic? Go forth and find your own coven. It is all in the cause of girl power.

Here are Debut’s favourite witches from film, TV and fiction to inspire you:

*This piece is about witches and their portrayal in pop culture and not the real witches of today, and the real practice of magic.

Debut Magazine How TV portrayals of witchcraft are paving the way for feminist representation
%d bloggers like this: