A couple of weeks ago, a Twitter user sparked a revolution, tweeting a film pitch featuring Lupita Nyong’o and Rihanna. What happened next proved that dreams can be reality and reminded us that social media is still a powerful weapon for creatives.

Never underestimate the power of Twitter. The social media platform has proven time and time again that, as well as being one of the best places to share memes and start virtual beef, it also has incredibly useful applications – donation campaigns, the quick dissemination of news, reuniting families and friends.

Twitter can now add another string to its bow: the place where THAT Lupita Nyong’o and Rihanna film was born. 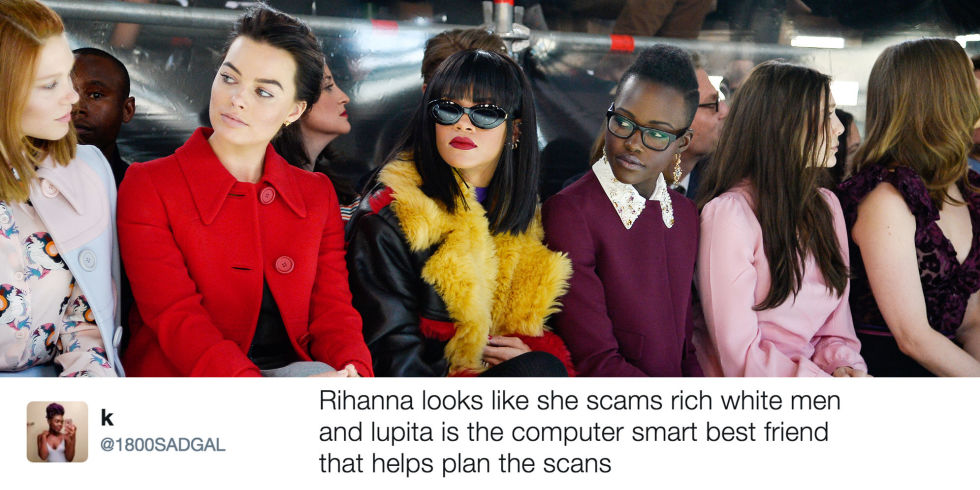 Now, the well-researched among us will know that Tumblr was the real birthplace of the idea, and it was user ‘Elizabitch Taylor’ (brilliant name!) who sowed the seed with the following caption: ‘They look like they’re in a heist movie with Rihanna as the tough-as-nails leader/master thief and Lupita as the genius computer hacker’. What sparked this ingenious idea? A photograph taken in 2014 of Rihanna and Lupita Nyong’o sat side-by-side on the front row at Miu Miu’s runway show during Paris Fashion Week.

Fast forward to Twitter-user @1800SADGIRL sharing a similar sentiment three years later: ‘Rihanna looks like she scams rich white men and lupita is the computer smart best friend that helps plan the scams’. And that was the moment when when the world got involved. Retweeted more than 99,000 times and liked more than 210,000, fan-support went global. We reached fever pitch when both Rihanna and Nyong’o tweeted their approval of the idea; and then we hit full-on hysteria when Ava DuVernay responded to calls to direct, followed by the announcement that Issa Rae was taking over writing duties.

If Tumblr was pre-production – a think tank for new ideas in their infancy – Twitter became the business-centre, the place of development, production and PR. Creativity on Twitter has a long and rich history of course. People have published books from ideas born on the site, others have made their fortunes on comedy accounts (looking at you @imjustbait), and there is a legion of users who use ‘Moments’ and tweet threads to create fully-illustrated stories (see @XLNB). But the idea that two incredibly famous and successful women would respond to a social media campaign, drawing the attention of two more incredibly famous and successful women, and that said idea would become one of the most sought after films in a fierce bidding war is unprecedented. This epitomises the potential of social media: the ability to communicate directly with celebrity, ability to share an idea quickly and, in the likes, retweets and replies, studios have the perfect barometer by which to gauge the potential audience and popularity of an idea. In this case another internet-hit (Netflix) won the rights to film and distribute the film at Cannes.

Twitter has recently been a forum for film fans to largely share their dissatisfaction with major releases, particularly questionable casting choices. Fan-casting is no new phenomenon but the fact that an idea generated on social media could become a viable production, with the calibre of talent it has attracted, might be the dawn of a new age for film. Now fellow users are hoping to replicate this success. Michael B Jordan playing the son of missing intelligence agent Idris Elba, who tries to track down his father and take down villain Mahershala Ali anyone?

Debut Magazine Everything you need to know about Lupita Nyong’o and Rihanna’s new film
%d bloggers like this: