Science Fiction author and British expat, Caroline Hough talks about her inspiration, finding time to write and getting published.

Caroline is a Science Fiction author currently living in Saudi Arabia. She works full time as a P.E. teacher and has two published novels: Solicia and Solestara.

Where does your inspiration come from?

Mostly from other Science Fiction novels and T.V. programmes including Star Trek and Firefly. I am also interested in the history of religion. I find the facts and legends behind current religions fascinating and did research into this. I mostly just let my imagination wander when writing!

Writing is not your full-time job, so when do you find time to write?

While writing the first book, I was living in the UK and my housemate was doing her Masters work in the evenings, so I wrote at the same time. I didn’t tell her what I was writing though! I finished Solicia and wrote the second book while working aboard. I wrote on and off, when I wanted to. If I was in the zone I wrote every day in evenings and on weekends. At other times, I took whole months off writing.

Lots of new writers struggle to get published. How did you go about it?

I didn’t actually send the book off when I finished the draft. Alfons (now my husband) found a list of publishers in a drawer and wondered what it was for! So I sent him the draft, he read it, and convinced me to complete it and send it off. I found publishers who specialised in Science Fiction writing and sent the manuscript off to all of them. Three of them replied; one accepted it on the condition that I had the manuscript professionally proof read. The manuscript was retyped into a specific format by the publisher and sent back and for being checked and approved. The same thing happened with the front covers: I gave suggestions and then a few examples were sent to me and we went back and for until both of us were happy!

Although there are many female science fiction authors, it is seen as a male-dominated genre. Do you think this is true? Has it affected your writing career at all?

I am not really sure. I actually can’t name any current female Sci-Fi authors off the top of my head, which probably says something! It might have affected some of the publishers’ decisions as male authors are a safer bet for them in the market. It shouldn’t stop anyone from trying though!

Will there be more books?

The books were designed to be a trilogy so the ideas are there and certain things have been left open. I am just trying to find the time to start to write.

How do you feel expat life has affected your writing career?

Expat life meant I had more time to write as my working hours are shorter. My publishing was all done online anyway so that didn’t make a huge difference. Advertising was harder though. There were less opportunities for interviews and book signings. Publicity was harder to arrange.

Have you got any advice for other writers?

Don’t give up! I know that’s what everyone says but it is true!

Use your imagination and worry about grammar later. Write about something that interests you, otherwise you get bored and it will come through in your writing. I found that you could tell if the book was good if, when you were checking, you got caught up in the story and forgot to check the grammar. Practical advice: get someone else to proof read; don’t rely on spell check; if you make up names, get other people to read them otherwise everyone might end up pronouncing them differently to what you had in mind! 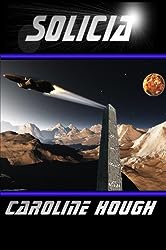 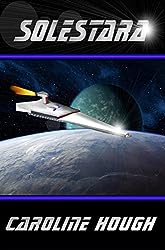 Solicia and Solestara are available on Amazon and Amazon Kindle and at Waterstones and Blackwells.